This site provides an introduction to collecting antique Chinese porcelain and ceramics. It also contains useful information and tips for collecting Chinese antiques in general.

Establishing a collection of Chinese porcelain requires not only antiques related knowledge, it makes it also necessary to learn a lot of peripheral things as, for example, the ability to recognize fakes. This is especially true with Chinese porcelain. This site provides basic information on genuine and fake antiques from China. It shall enable the prospective collector to make more informed decisions in view to Chinese antiques.

These pages provide tips and information to the beginning collector of antique Chinese porcelain. They also give collectors some information regarding the identification of Chinese characters found in antique porcelain marks.

Authenticity problems associated with porcelain and pottery from China require the attention of both, the new and the experienced collector. Some light will also be shed on Chinese commercial practices as compared to western purchasing attitudes, and why fakes are proliferating.

What do we define as 'antique' Chinese porcelain?

This site concerns only 'antique' porcelain. Vintage or other 20th century items are not included. Our definition of antique Chinese porcelain follows to some extent customary practice here, where we live:
(1) An antique must show porcelain age signs.
(2) It must originate either in the early republic, Qing or Ming dynasties, or even earlier.

The question is what is considered "early republic" period? We usually consider anything made after the Qing dynasty (1644-1911) during the 1910s or 20s as early republic, thus for us it ends 1930. Anything produced later is qualified as "vintage".
The content of this site concerns only hand-painted porcelain. Printed porcelain or transfer wares are not included. 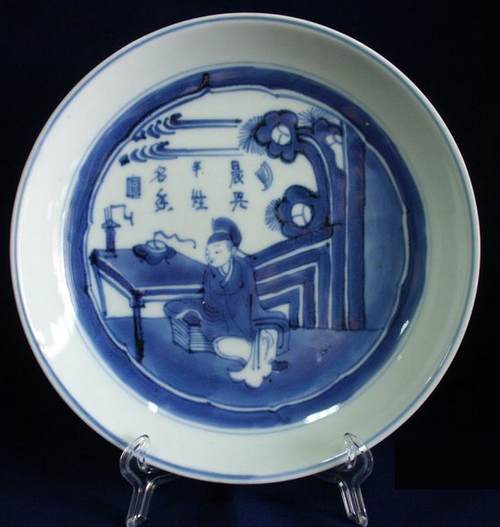 Range of this site

As stated above this site concerns primarily antique porcelain. The information you find here is neither related to vintage nor more recent Chinese porcelain.
All information relates to antiques from imperial times up to around the early 1930s). This is also valid for marks, etc.

Differences between Chinese 'porcelain' and other Chinese ceramics

It can be a bit difficult to understand the difference between porcelain and other wares in the case of Chinese ceramics. This is especially the case in the land and language where porcelain was first produced. Frequently all types of glazed ceramics are called "porcelain" by Chinese collectors, even if they would be classified as glazed pottery.

The Chinese language and culture differentiates normally only between porcelain and earthenware. Stoneware, for example, is a new concept introduced from abroad that is hardly known in China. There did not even exist a character for this in the Chinese language. Thus, more often than not what is called 'stoneware' in the west is just called 'porcelain' in Chinese.

Don't try identifying antique Chinese porcelain via the mark! If you are new to Chinese antiques and are here to identify some items via their marks, then do yourself a favor and read the mark comparison page first. Marks on antique Chinese porcelain served a completely different purpose than the marks of Europe. They were not used as trademarks or logos which would allow identification of the manufacturer.

Therefore, it is generally futile trying to date or find the source of an item via the mark. This would be only possible with non-antique Chinese porcelain made later in the 20th century, or with Qianjiang porcelain, a type that was sometimes signed by porcelain painters, but which was made only from the later part of the 19th century.

The western method of dating antique Chinese porcelain by centuries has advantages, but also some disadvantages. Here, for the sake of simplicity, the periods or eras mentioned in this site for ceramic age/dating follow mostly the imperial or reign year method. The single periods of these are given in the tables of the Ming and Qing emperors, linked on each page.

(Please see the navigation menu on the left.)

Production of Chinese Porcelain was always influenced by China's economy and the trends of overseas markets, respectively.

During the Song, Yuan and early Ming dynasties (10th - 16th centuries) much if not most of porcelain production was export oriented. But, domestically used porcelain was basically the same as that which was exported. Only from the 16th century, in the Ming dynasty, some porcelain started to be designed and produced  specifically for overseas markets. In the Qing dynasty this went a step further - some Chinese porcelain was exclusively made for export and was not used in China itself.
Read more

No time to read all the information on this site?
Read the important details in PDF format. All content is
streamlined and reduced to the bare essentials for your convenience.