Deciding what to collect and what not
... depends largely on individual taste

Not all Chinese ceramics may be desirable for a collection

Whether an item is collectible or not is really up to the individual collector. This page mentions a few items that many western collectors may prefer to omit, but which they do not recognize. Some are sold under names that do not reveal their original purpose.

Not sure if the actual usage of such items is sometimes not recognized or intentionally misrepresented by sellers. I think rather the former, because sellers often do just not have the background or cultural knowledge to know what certain items were used for.
For the benefit of non-Chinese collectors I list here a few items that are looked at differently by each individual collector, and especially by western collectors in opposition to Chinese. Some collectors may want to omit these from their collections.

When considering what to collect, you may want to make an informed decision regarding the items listed below, rather than collecting indiscriminately all and everything, without knowing what it is.

For example, items with painted or inscribed text either on the back, bottom or interior of a plate, box, or lid do require some knowledge of written Chinese to identify what the item was actually intended/used for.

Portable urinals are often misrepresented in seller's websites as “ewers”. They usually have a handle and very big but short spout, but no lid or opening on top. Unlike western chamber "pots" they served for urinating only. Thus, although there are different shapes, they have some unique features which allows you to recognize them.

Urinals come in various forms and colors. Their common features are:

- Longitudinal or round shape, or rectangular

- No lid or opening on top

- Handle on top of item

- Has a short but very wide spout (actually that "spout" is the place were the urinating is done.)

These urinals have been in use for a very long time (over a thousand years); they do exist in drab colors or simple glazes from a thousand years ago, and also in more recent underglaze blue decorations.

Note:
Some dealers in the west offer them for sale under the name “ewer” or "water pot".

Examples:
(1) Click the link on the right for an example of an urinal: item no. 27.
Urinals can be rectangular, oval/longitudinal or round. These are just a few shapes; some may be completely circular instead of oval.
(2) Copy the following Chinese characters "虎子  夜壺" and do an image search on a search engine. You will get the general idea how this type of item looks.
The Chinese also call these "tiger or night pot". Looking at these shapes it should be clear why "tiger" (!).

Remark:
There is also a shallow, open type which is said to have been for females, but they are so rare that it is more likely that the type with the spout was used by both genders.

Spittoons have also existed far over a thousand years. Usually they have a round body and a funnel shaped top. A number of them was made with a separable upper and lower part (the funnel was removable).

Spittoons highly resemble another vessel that was used to discard used, ground tea leaves during the Tang dynasty etc..

The opening at the lower end of the funnel (connection to the container) on top is often somewhat smaller. The diameter of that portion or shape is however not a reliable feature for distinguishing between the two, in my view.
Vessels for discarding tea leaves can occasionally be seen on ancient paintings, where they are held by an attendant.

Epitaphs come in various shapes and forms and, of course they come all from tombs (although there are fakes of these existing too). Usually they were especially made to order for affluent people, who could afford this. Firing a single porcelain item would have been expensive, in those times, when commoners hardly could afford plain porcelain. Such epitaphs would have existed mainly from the Ming dynasty onwards in underglaze blue. Those claiming to be from the Yuan dynasty are fakes. 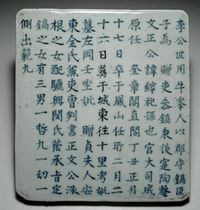 Epitaphs record everything from name, family, career, etc. Sometimes several tablets with text were needed to record the whole history of a well-to-do person. Sometimes there was only one plate.

Epitaphs can also be found on everyday items, usually scratched or incised into the glaze, occasionally written in black on an unglazed area. (But not all such ink writing means it is an epitaph!)
Plates with a flat interior bottom, which were new and probably obtained explicitly for this use are also found. Sometimes items that were originally used by the deceased were also inscribed. That again may be a plate, but one thing that frequently appears with epitaph writing on the inside, bottom or lid, are seal paste boxes that belonged to the departed. These appear especially frequent with a type of small blue and white porcelain box originating in the early 19th century. (Careful, while the item itself often is genuinely old, the inscription may be fake/new! Obviously this is because some buyers are not aware of this and sellers think the writing increases its perceived value.)

Of course, epitaphs inscribed in such a way would usually be short and simple, as space was limited. And, naturally, all authentic epitaphs are from burial sites. If an epitaph has a date, then all other burial items inside the tomb can be reliably dated too if it has not been plundered previously. That is the way it should be...unfortunately, there do exist fake epitaphs too!

Epitaph plaques specially fired for the occasion are usually rectangular or circular, some may have rounded corners, or a round on the top side only. They usually contain text only, no other decorations.

Chinese collectors sometimes do have very specific taboos in view to what they collect. This sometimes concerns items that relate to their beliefs/faith.
The Daoist population generally appears to be a bit more superstitious. They will often avoid collecting items like censers, figurines of deities,etc., especially if these have been in actual use, out of concern that they may be imbued with the spirit of previous users, the deities, etc.

Cultural info:
As a matter of fact, figurines of deities are usually made to go "live" in a Daoist ritual, inviting the deity to enter the figurine, before it is used on an altar. Once the use of such a figurine is discontinued, another ritual is required to ask the deity to leave. Many Daoism believers are afraid that the deity might still be present in an antique figurine, and thus avoid collecting these.

In the case of censers the assumption is that the censer is imbued with the spirit of those who burned incense using these, when praying. Of course, such concerns do not arise if an item is new.

From "Collectable-or-not" back to Homepage