Dated porcelain comes more often than not in the form of a dedication or verse on the outer circumference or on the lid of a porcelain vessel. The date is usually in the form of a cyclic calendar year, often accompanied with the season or moon (lunar month).

We do not not know for sure if this application of a signature or date was used to any greater extent during the 18th century. Only the Yongzheng reign is known for blue and white porcelain with text like this later type of polychrome porcelain. However, adding a cyclic date clearly became more frequent towards the later 19th century. This coincided with increased popularity of Qianjiang style of porcelain painting, a style which was accurately mimicking traditional Chinese painting. 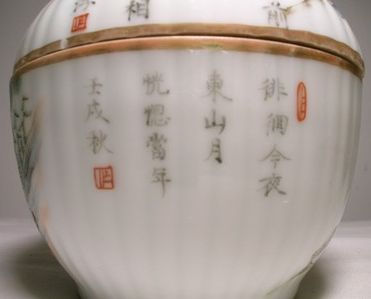 The fluted bowl in the picture above has three characters in the last vertical column on the left. A red seal is affixed below these. The first two characters represent the cyclic date corresponding to either 1862 or 1922 (see 60 year cyclic calendar), and the last means "autumn".
The decoration style and other factors allow then to select the most likely date/year of production.

However, please be aware that fakes also may use the cyclic date, in this case a false one, to mislead a potential buyer. It cannot be emphasized enough that as with marks it is not possible to solely rely on a cyclic date on signed porcelain. Always take all aspects into account when identifying the age of porcelain.

Back to Porcelain Marks

Go from Dated Porcelain to Home