The large majority of craft motifs, that is the decorations used in Chinese art and craft can be categorized as belonging to either of the following several categories:

Art and Craft Motifs as an Expression of Chinese Culture

A lot of these craft motifs have a symbolism attached that is peculiar to Chinese culture, and often it is linked/related to the Chinese language or uses the pronunciation of written, auspicious characters for word plays involving pictures that are painted on porcelain.

Many objects depicted in Chinese arts and crafts, be it paintings, ceramics, carvings, embroidery, or other, represent a symbolism that is inherent to and exists in all traditional crafts of China. Even buildings, roofs and interiors of houses were decorated with these motifs.

Some objects directly symbolize certain concrete, real or non-touchable, ethereal qualities, which are considered desirable in Chinese culture.
Others objects, plants, animals or deities are in direct or indirect association with a certain symbolism through either the meaning they represent, or an association of the character pronunciation of their names; these in turn are then associated with a positive meaning or desirable effect.
Even certain colors or shapes are associated to good meanings in Chinese culture.

Not all of this association is limited to positive or desired things, actually this symbolism penetrates the whole life.
Negative associations or the darker aspect of this is nowadays often related to what we would call superstition. Usually, it is not the subject of decorative arts, however.

The following list shows some of the more popular subject materials used in the decoration of traditional Chinese crafts.

Example:
The magpie below is a typical example of such a symbolism. Therefor it is frequently encountered on porcelain decorations.

Due to the pronunciation of a character in its Chinese name the magpie is associated with the character for "happiness", which is pronounced in a similar way. Thus the magpie is considered an auspicious symbol and it represents the meaning of "happiness" in porcelain decorations. 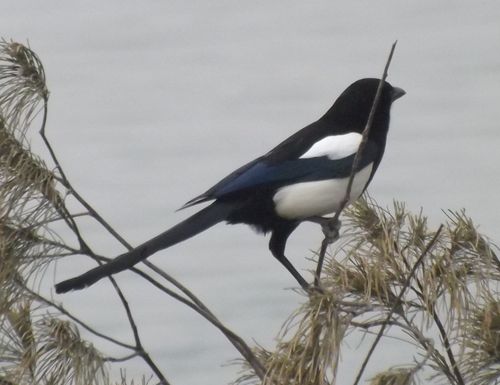 Chinese Symbolism in Art and Craft

Return from Art and Craft Motifs to Home page