As far as I am concerned, I know of two methods that are used by Chinese for tea drinking and preparation, as used today. These are both essential parts of contemporary Chinese tea culture.

Tea is generally also drunk as a beverage accompanying meals, but this is unrelated to Chinese tea culture, as far as I see it. It is just that - a beverage for tea lovers.

Historically, it is known that (some) Chinese did drink tea directly from the spout of the teapot. This is thought to be the reason that some teapots were made so small. They were intended for the use of one person only.
It is unknown, however, how far this custom was spread.

Tea drinking a thousand years ago

In ancient times (e.g. the Tang (618-907) or Song (960-1279) dynasties) the tea would be drunk only after grinding it. From the Ming dynasty onwards whole tea leaves would be infused, the same way as we drink Chinese tea today.
Tea preparation and utensils were quite different in the time from the Tang to the Song dynasties.

In preparation for drinking the tea was ground with a pestle in wide bowls with an incised criss-cross pattern. A necessary preparation before drinking, as coarse tea was used at the time.

Teapots were made of pewter until later in the Song dynasty, when clay pots started to appear and all but displaced pewter in the Chinese tea culture. The tea used also became more refined during the Song dynasty until no preparation with the pestle was required before the infusion of tea leaves.

In the Tang and Song dynasties wide-mouthed bowls were used, like the Tenmoku bowl shown above.
Originally, celadon bowls were preferred, admired for their beauty, but as tea contests became widespread, black bowls gained poularity. The contestants would whip tea and the one whose froth remained the longest won.
As black glazed bowls showed the froth better, black later replaced celadon bowls as the preferred color of tea bowls. 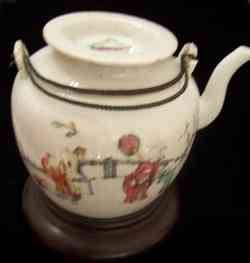 (see Yixing pottery).
However, porcelain teapots like the one shown on the right were and are also widely used.
With all teapots of this type the infusion
of the tea leaves happens in the teapot. The tea is then poured into small cups immediately before drinking.

There is another, usually larger type of porcelain teacup with a wide mouth, rather like a bowl, and with a lid. These may contain the tea leaves themselves. At the time of drinking the edge of the lid is used to move the leaves to the side. These cups are usually made of porcelain.


* Note:
'Gongfu tea' is one of the names used by the Chinese for Chinese tea that is prepared in a specific way for drinking. Sometimes it is also called 'Laoren tea' (=old men's tea), presumably because the steps of its preparation take some time and only old men would have the leisure for this.
This type of tea drinking is currently done mostly with the use of Yixing pottery wares.