The controversial naming of the Swatow wares and their origin

The porcelain called Swatow ware for a long time was a type of early export porcelain that was of a more crude variety. The kilns making these were located in Zhangpu and Heping, in the Zhangzhou area; these kilns also made some early Kraak style wares.

Due to their name (Swatow wares), for a long time nobody was quite sure which kiln(s) actually made them. Swatow was the old western name for Shantou, farther south. However, apparently it was not the place where this export porcelain was shipped from as in the distant past its local fishing port had insufficient depth for big trading ships to enter.
Archaeological excavations of kilns in China finally lead to the discovery of kiln waste and shards in another location to solve the mystery - proving that Zhangzhou area kilns, mainly Pinghe and Zhangpu kilns were the real source of these wares. 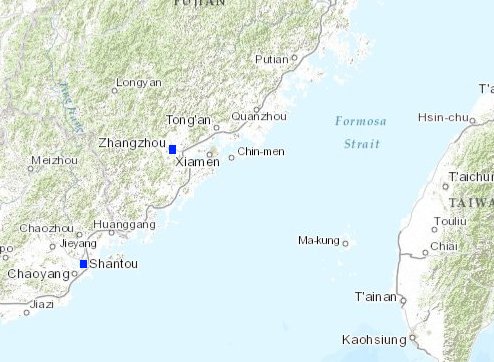 Located on the coast of Fujian province, opposite Taiwan, the coastal place called Swatow by foreign traders in the past is now called Shantou. In those times Swatow was designated trading ports (it is said), however, at the time when the 'Swatow' wares were really exported, in the Ming dynasty, this was actually too small al port which probably was not capable to ship huge quantities of export porcelain.
For some obscure reason several hundred years ago Swatow's name became associated with the flourishing export commodity of porcelain. But, in reality it was neither produced there nor was it shipped from this area in the Ming dynasty. The area is known for porcelain production from the early 19th century, though, much later.

Archaeological excavations of other kilns sites done in China in the late 20th century resulted in proof that these "Swatow" wares were actually produced in Zhangzhou. Now they are usually called 'Zhangzhou' porcelain, except by those who have not discovered the controversial naming yet.

Zhangzhou is located farther north along the coast from Shantou, in Fujian province. Shantou (Swatow) itself is located on the northeast coast of Guangdong province, near the provincial border with Fujian.

Zhangzhou
During the Ming dynasty Zhangzhou was  a very large production center. Its porcelain wares were predominantly exported to Southeast Asia and Japan.
Zhangzhou wares were predominantly made  at the Zhangpu and Pinghe kilns, but there were a few other small kilns making these also. The wares were the shipped from Yuegang (Yue Port), located in the same bay. Yuegang became a major trading port.
During the sea prohibition (the Ming ban), when the imperial court did not allow any activities on the sea, Yuegang was one of the smuggling ports in the area which continued shipping merchandise despite the ban.

Due to internal unrest and strife towards the end of the Ming dynasty Zhangzhou porcelain started to decline in the 17th century. Although production was resumed later, in the Qing dynasty, it never fully recovered; Xiamen (old name: Amoy) became the main center of porcelain production in the area.