Porcelain packaging can be shocking at times!
When we got the parcel below from Europe we did not dare opening it ourselves - this was once a rectangular box!
It is better to have the post office handle parcels that could contain broken items, for compensation claims could be avoided both by the post or sender once you have accepted and opened such a parcel yourself.

The first three pictures below show the parcel immediately after receiving it, yet unopened. We suspected that the porcelain plate inside was broken and had it returned right away to the post office, to be opened in presence of someone there. Negligence in packaging is a frequent cause of broken content.

Note:
The adhesive tape with green imprinted writing was stuck all over the parcel by the post office in the arriving country upon arrival, in order to avoid that the parcel disintegrated even more.

The fourth picture shows the parcel after post office staff opened it. The cardboard had completely changed shape, even the different layers of corrugated cardboard had separated due to the moisture. The cardboard of the box was soggy and the box had changed shape. Even the green nuggets were still moist. But as luck had it - the plate was intact!

The only plausible explanation for such a condition is that the parcel was probably somewhere exposed for a considerable time to heavy rain, perhaps even on the tarmac, while waiting to be loaded unto another plane...

Two things come to mind. If the parcel had contained an item that was sensitive to water (wood, cloth, paper) the content might be damaged now.
It was pure luck that the the porcelain plate inside was not destroyed. A box in such a state could not possibly protect its content from external shocks. In this case the bubble wrapping and nuggets used for packaging were of great help. If newspaper had been used for stuffing the box the result can be imagined.

The item below is the result of gross negligence...no proper packaging material at all. The purple cloth was the only packing material inside the box. No bubble wrap, no nuggets, not even crumpled newspaper.
The box had a width of less than 5cm, this item was only wrapped in this cloth. It is a shame, after more than 250 years of its existence this 18th century dish met this end due to the sender's negligent packing. 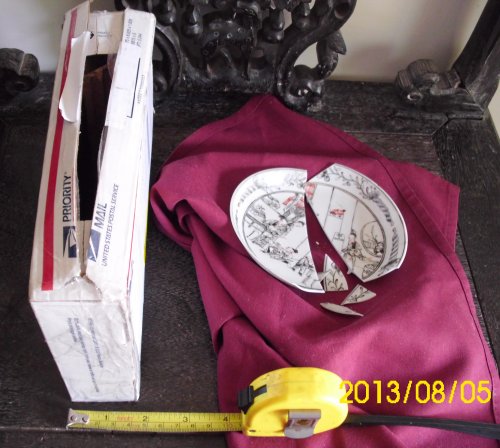 Ceramics Packaging - How not to do it