The Role of Yixing Pottery
in Chinese Tea Culture

Yixing pottery has been part of Chinese tea culture for centuries. We mention it here shortly for those collectors interested in teawares in general.

During the Tang and Song dynasties preparation of tea (tea brewing) was quite different, and a coarse type of tea was used. The preparation for drinking consisted mainly in grinding it with a pestle in a rubbing movement inside a wide bowl with grooves down its inside. This is not unlike the preparation of Lei Cha (Lei Tea) of the Hakka people today.

Today, many Chinese fond of drinking or brewing tea in the traditional manner are avid collectors of "zisha", "tiesha" and "zhusha" teapots from Yixing kilns.
Zisha (literally meaning "purple sand") is the name of a clay frequently used for Yixing pottery in the Chinese language.
Tiesha literally means iron sand, due to its high iron content the clay is very dark, almost black, and Zhusha is the more reddish type of Yixing pottery clay. "Yixing" itself is the place name of the place where the pottery has been made for centuries. Yixing pottery is now mostly used for tea wares, both pots and cups, and some other tea paraphernalia. 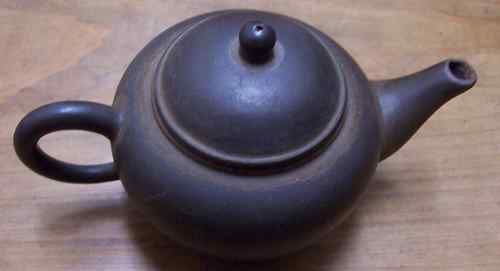 This Yixing tiesha teapot has a greyish black color and
visibly has been in use for quite some time.

The clay color ranges from a reddish brown to a very dark brown and greyish black. Basically, these Yixing pots and cups are all left unglazed.

However, tea wares were not the only products of the Yixing kilns in the distant past. Yixing wares include planters, brush washers and much more. The latter are/were manufactured both in unglazed and glazed form. In the Ming and Qing dynasties Yixing did also produce life-like figurines, ceramic replica of walnuts, lotus kernels, lychees, pomegranates, water caltrop and other produce, as well as crabs, coiled sea shells, etc.
Later, during the Qianlong reign Jingdezhen followed suite and started also making such items using porcelain as material.

Yixing itself has a very long history. It first fired red pottery some 2000 years ago, during the Han dynasty. It is one one of the oldest kiln sites still operating today!

Terminology in modern Chinese tea culture
Modern tea culture enthusiasts call teapots made of Yixing pottery clay living pots, and rubbing it is called "keeping the pot" (as one "keeps" a pet)... Other types of teapots are called "dead" pots.

With the former, after tea drinking is finished the tea leaves are removed from the pot, but the pot itself is not cleaned inside. Instead, it is flushed with water and left to dry. The outside of the pot is rubbed dry with a cloth. This is also done frequently when the teapot is not in use, even with new, yet unused ones. They call this "keeping the pot".

After doing this for a long time a thin layer of tea residue forms on the inside of the pot and some of the tea is able to penetrate the pores of the clay. Due to this, merely adding hot water without any tea leaves can flush out these tea residues and produce drinkable tea without tea leaves, hence they are called "living" pots.

Teapots made of porcelain or other non-porous materials on the other hand are called dead pots. Their vitreous surface layer cannot absorb tea residues.
Rubbing the teapot will usually increase a teapots' collecting value.

Unfortunately, depleted Yixing clay mines are affecting Yixing pottery production. You have to be careful what you use to drink tea today. The current situation might lead to a major shift from the use of Yixing wares to porcelain in the future, although a new mining area for the clay appears to have been opened farther north in China.
Currently, many Chinese already prefer drinking from decades old vintage pots rather than from new ones anyway.